We are saddened by the passing of Joan.  Here is the information on her arrangements.  Please pray for her and her family. 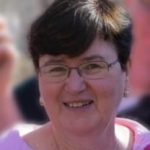