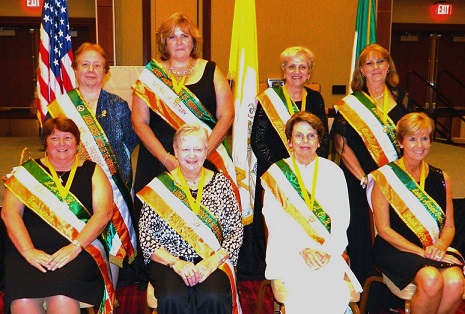 The Ladies AOH has changed in many ways over the decades but still we hold true to our MOTTO of “Friendship, Unity and Christian Charity. We are pledged to God and Country. The primary purpose of the Ladies AOH was to protect young immigrant Irish girls coming to the United States, to assist them in securing employment, to give them the opportunity to be with their own kind, and to keep them from becoming homesick and discouraged. The Preamble of our Constitution states that the intent and purpose of the Ladies is to promote Friendship, Unity and Christian Charity among its members; assisting the people of Ireland to establish an Irish Republic which shall include the 32 counties of Ireland, aiding the aged, sick, blind and infirm members and for the legitimate expense of the Ladies, including Missions work and Catholic Action. The Ladies also foster the ideals and perpetuate the history and traditions of the Irish people and promote Irish culture. Our Patron Saint is Saint Brigid of Ireland.