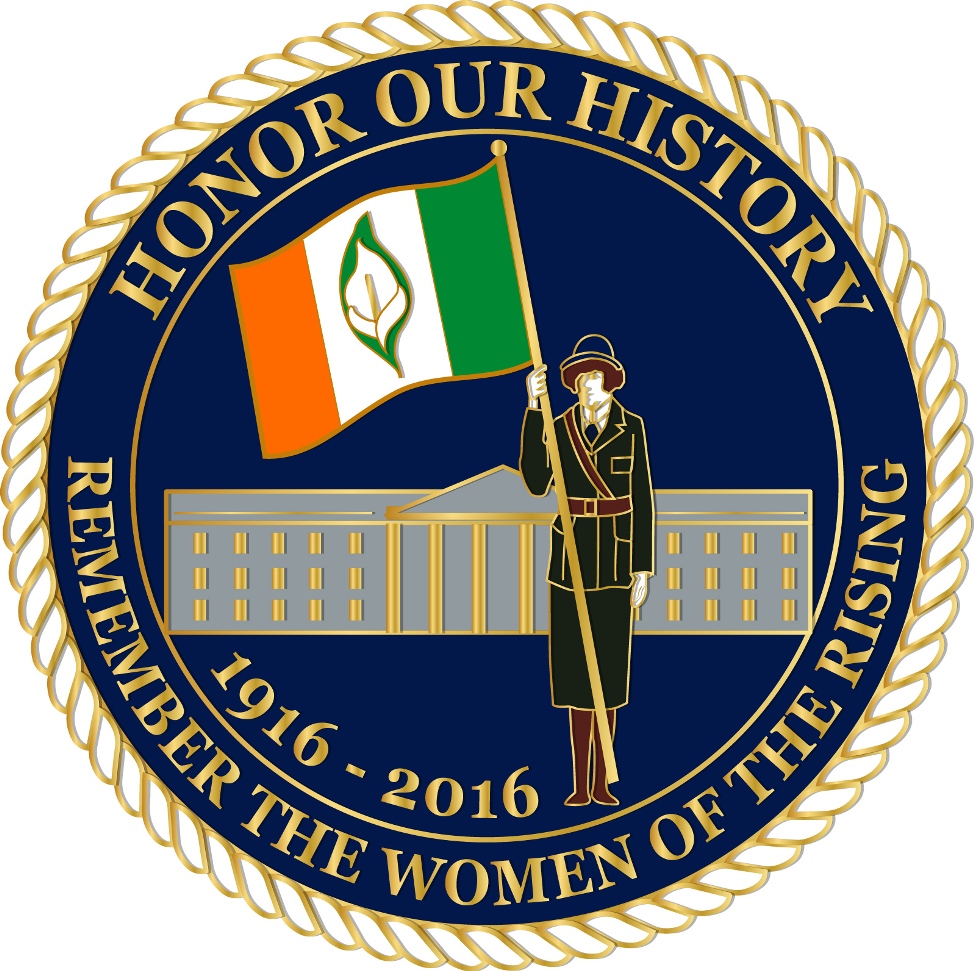 The “Honor Our History” pins

is a special project of the

To Honor the Women of the Rising.

The symbolism of the pin is:

The building in the background is the General Post Office in Dublin.

The Pin has a blue background which is the national color of Ireland that acknowledges the independent (and 32-county) Ireland that had existed hundreds of years earlier and should exist now.

The flag is the tri-color which is the national flag of Ireland.

Green – signifying Irish Catholics and the republican cause

The Easter lily in the center of the flag was introduced in 1926 by Cumann na mBan. It was sold to help support the families that had lost loved ones.

She also was inspired by Mollie O’Reilly. On 16 April 1916 the flag of the Irish Republic, with the harp but without the crown, was first raised over the hall; Molly O’Reilly, aged fifteen, unfurled it. Connolly handed the flag to her and said: ‘I hand you this flag as the sacred emblem of Ireland’s unconquered soul’.

Mary Shannon, a machinist at the Liberty Hall shirt-making cooperative, made the flag.

The chain around the pin represents the chains that Kathleen Clarke wore when she was sworn in as the first female Lord Mayor of Dublin in 1939.  Her first action as Lord Mayor was to reject the Lord Mayor’s chain, because it had been presented to the city by William of Orange. A smaller chain, the City Chain, was hastily produced. She said she would wear Her chains till Ireland is free.

Support for a U.S. Postage Stamp Honoring the 1916 Proclamation

The proposed model for the stamp would have illustrations of the Declaration of Independence and the 1916 Proclamation of the Irish Republic flanking the Light of Liberty under a banner containing the words “Liberty’s Legacy.”

Click Here for Sample Letter for 1916 Stamp.  Certainly such a worthy project is worth a few minutes time and a stamp to see that the rebirth of the Irish Nation, a constant friend to the United States,  is celebrated.